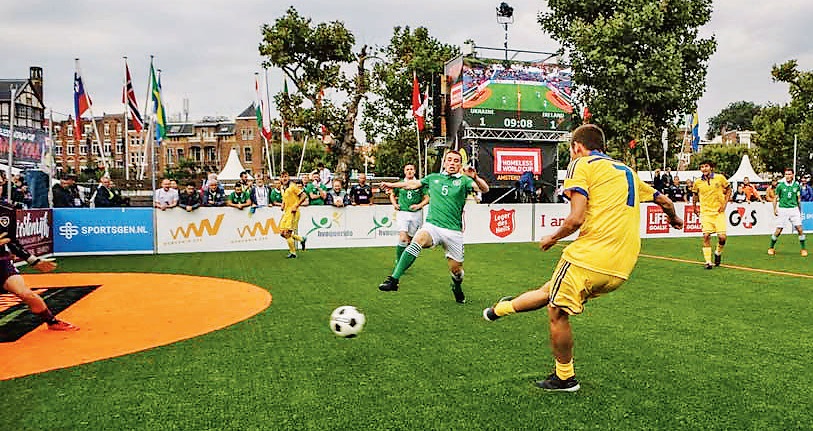 Oslo prepares for the 15th edition of the Homeless World Cup

This week saw the group stages for this year’s Homeless World Cup in Oslo announced after the tournament draw took place in the Norwegian capital. The 72 teams from 54 countries have been sorted into groups for the 15th edition of the tournament, taking place in Oslo’s iconic City Hall Square, Radhusplassen, from August 29 to September 5.

Over 500 male and female players from across the globe will be in attendance, in what is promised to be the biggest and most ambitious Homeless World Cup to date.

This year’s event will see eight groups in the men’s competition and four in the women’s. Four new teams have been added to the roster this year as the tournament continues to grow in popularity. The men’s competition will see a team from Senegal playing for the first time, while teams from Ireland, Malawi and Northern Ireland will be debuting on the women’s side of the draw.

Last year at the Glasgow World Cup, nearly 100,000 spectators flocked to go and witness the free-to-watch games, which were staged in George Square in the heart of the Scottish city. Organisers said that over two million people watched the tournament online. These viewing figures have been forecasted to increase again in 2017.

On the opening day, the hosts will kick off the tournament with games against the talented Brazilian and Chile sides. Mexico, the winners of the men’s and women’s trophies in Glasgow will play on the following day.

The Homeless World Cup Foundation and its partners have impacted the lives of 1 million homeless people around the globe since its inception. Their street football partners operate in more than 450 locations, reaching 100,000 homeless people every year. Each year, this network of partners hand pick the 500 players to compete in the annual World Cup tournament.

In addition to inspiring marginalised people to make positive changes in their lives, the Homeless World Cup aims to challenge the public’s perceptions of homelessness and the issues that surround it. By showing the human side of homelessness, it aims to help breakdown stereotypes and change the ways in which people think and talk about homelessness. Simply attending the tournament – being exposed to the inspiring stories of its remarkable participants can change people’s perceptions of an individual experiencing homelessness.

Scottish Minister for Sport Aileen Campbell said: “The Homeless World Cup is a fantastic and exciting tournament that everyone can get behind. It's so great to see a perfect example of how the power of sport can both transform lives and change perceptions for the better."

“SPORTS CAN BE A MEASURE OF WHERE SOCIETY IS, AND A CATALYST FOR CHANGE”