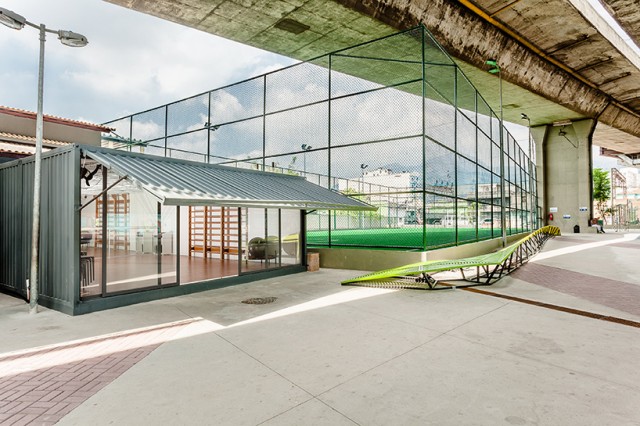 Beyond the medals: Nike makes impact to get Rio’s youth more active

As the world keeps its attention on the athletic exploits in Rio for the summer games, Nike has made a substantial impact outside of the venues for the city’s youth. According to Designboom, the Beaverton, Oregon-based athletic giant is partnering with the city of Rio de Janeiro to upgrade and revitalize four community sports and recreation centers in the city’s more under-represented areas. Three have been completed with the fourth scheduled to be finished after the Olympic Games. This is the result of over a decade’s work by the brand in the country. As noted by Designboom, safety and lack of infrastructure hinder mobility and activity — and the project’s purpose is to allow children to engage in greater activity.

The goals of the “Olympic Villages” in Rio are to improve access to sports and physical activity for 25,000 to 50,000 kids. Additionally, the program intends to equip 600 physical education teachers and staff to tech early, positive experiences about activity. Nike will also provide 40,000 pieces of product and equipment per year. At present, four villages have been fully renovated, with design touches that include graffiti artwork from well-known local artists. The initiative is slated to continue for at least five years and Nike will give 1,000 employee volunteer hours per year.

“Today’s generation of kids is the least physically active in history, and Brazil’s kids are the least active in Latin America,” Jorge Casimiro, Nike’s vice president of global community impact told Designboom. “We want to change that. Together with the city and the Olympic Villages communities and partners, we’re hoping to transform the culture of sport for the next generation of athletes in Rio.”

Brazilian Ministry of Health data indicated that only 14 per cent cycle or walk to work and 34 per cent of Brazilians, aged 18 or older, are active in their free time.

The Brazil project is one of many that Nike has created to stem the trend of inactivity in young people. In the United States, the company partnered with Michelle Obama’s “Let’s Move!” initiative, reaching more than 10m children in the country. Additionally, in China, Nike worked with the ministry of education to, according to Casimiro, “get two million kids moving.”

For their part, Nike believes that the foundation built in Rio has tremendous opportunity and a bright future. “There is unlimited potential for us to take the innovative approach we’ve created here in Rio to other parts of the world," said Casimiro.

"This approach — training PE teachers to deliver positive experiences in sport and physical activity for kids, designing spaces that foster a love for movement, volunteering by our passionate employees and connecting to inspiring brand moments — was designed to inspire and motivate Rio’s Olympic Villages communities to celebrate and foster a love for movement among Brazilian youth, and we’re already beginning to find ways to bring it to other parts of the world.”

All photos courtesy of Nike, Inc.