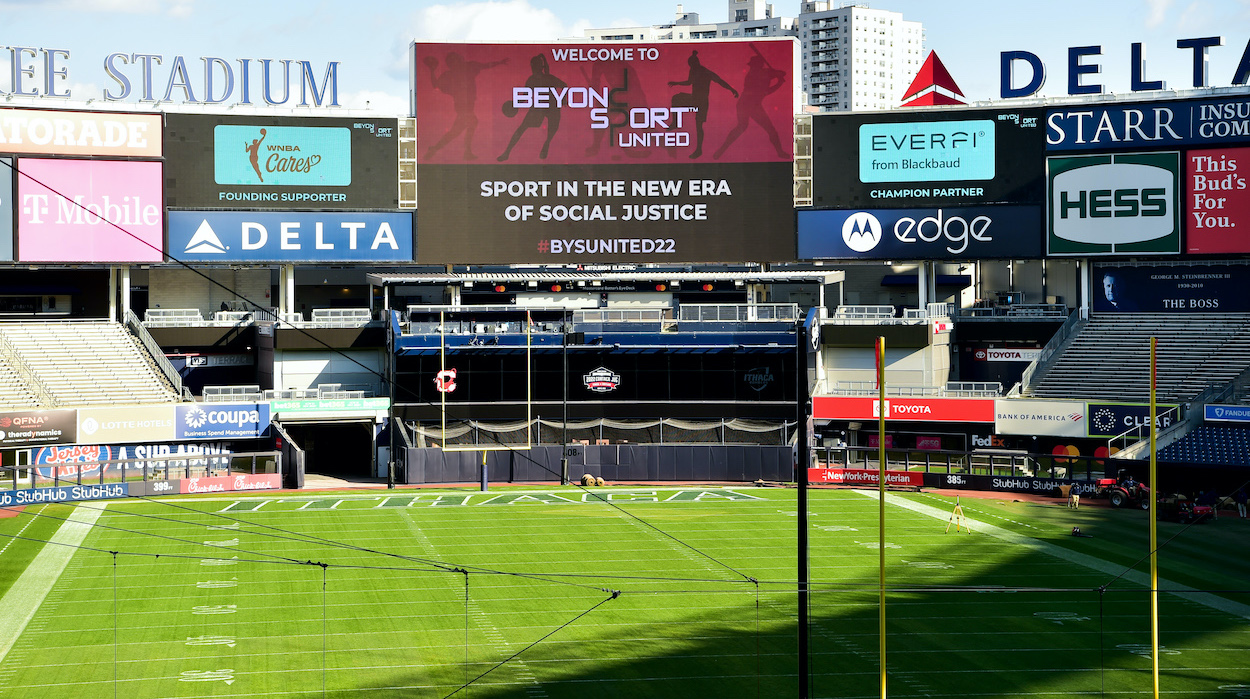 Beyond Sport United 2022 Explores Equity & Justice in the US

On November 17, experts and leaders from in and outside the world of sport gathered at New York's iconic Yankee Stadium for our 12th annual Beyond Sport United. The interactive day was one of learning, challenging discussions, new perspectives, collaboration and connection as we focused on civic engagement, health and well-being and environmental justice across the United States.

"In an increasingly complex geopolitical time, with issues of social justice at the forefront, the world of sport is quite rightly being put under the microscope by its fans, players, employees and society at large," stated Beyond Sport Executive Director, Fred Turner, to open the event. "And while sport doesn't have all the answers, its unique position and reach provides a powerful tool to elevate diverse voices, reach local communities and authentically take action." 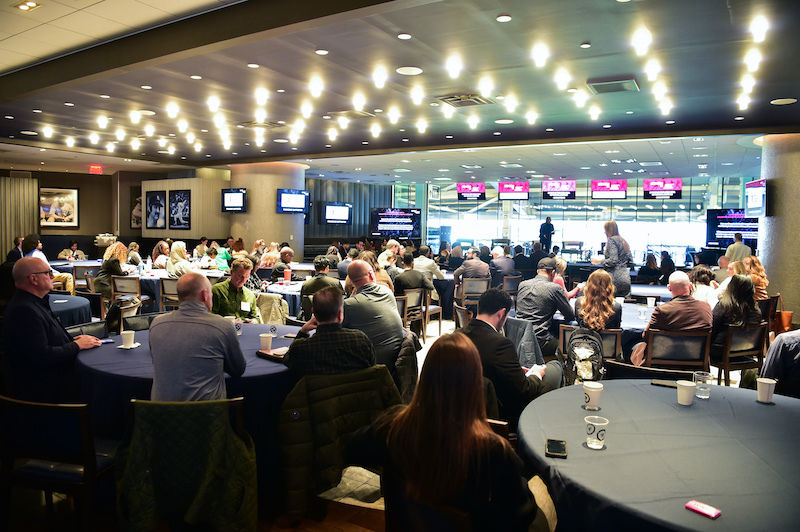 Following a welcome from New York Yankees' Senior Vice President of Marketing, Deborah Tymon, trailblazing journalist, activist and author, Carol Jenkins, set the scene on social justice and provided some sports-based motivation for the audience: “We’re working against centuries of systemic injustices for a just world for all. How do move forward in collaboration and join hands for real change and impact? When on the journey, we need to remember that the rule of the game is you win some, you lose some. This is the same in social justice, but you always stay in the game.”

Event Host and thinkBeyond Co-Managing Director, Radha Balani, then kicked off the morning panels with an exploration on Collective Action in Civic Engagement. The throught-provoking and inspirational session touched on what it means to be an active citizen, re-thinking content that has a history of marginalizing too many and representing too few, and the state of human rights in the country. Panel moderator, Karen Given (The Long Game - a Doha Debates and Foreign Policy production), was joined by Ambassador A. Shabazz (Diplomat, Lecturer and Professor; Beyond Sport Board of Directors), Melissa Potter (Paramount) and Minky Worden (Human Rights Watch). 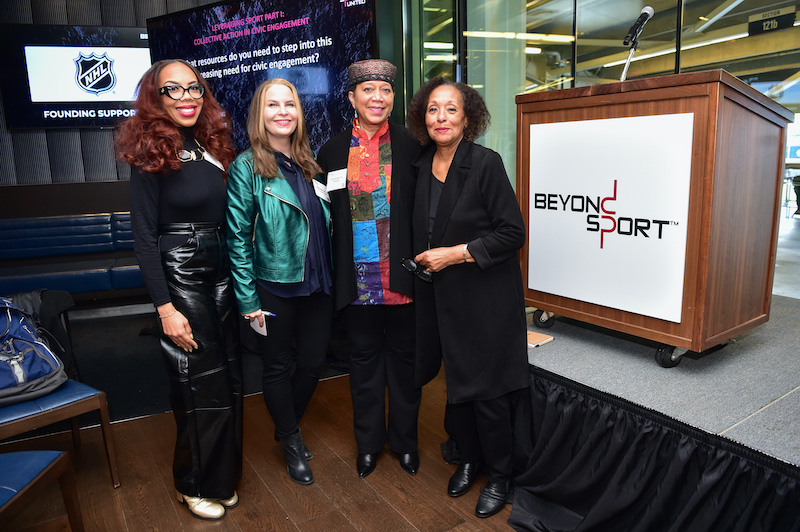 “Do you know what justice feels like?” said Ambassador Shabazz. “We're always working from the recovery side. What does it look like from the other side? It's the beneficiaries that inspire me. I want to be part of what's in motion, otherwise it's always about the impact of the losses...You are always 100% a citizen, no matter who is in the office, no matter what happens.”

When speaking on the impact of sport on her life growing up, she added: "Sport become one of many avenues for me to excel, exude and embody achievement without having to say anything. I know what it did for my soul and spirit."

Potter noted, "Truthful stories of marginalized communities are powerful. They bring difficult conversations to light...Content shouldn't play a hand in harm." Worden emphasized that "all human rights are interrelated, especially in sports" and spoke on the trifecta of access, safety and equality.

Willheim took the audience through a discussion of historical and generational trauma and how it is often not given enough priority when dealing and talking about impacts on health and resulting behaviors. Woods spoke on the need to change our approach to youth sport and how the Return to Play Fund, co-founded by ESPN and Beyond Sport, came about. “Sport was going to look different post pandemic. Especially for communities of color. That was the genesis of the Return to Play Fund. We have to meet communities differently. We have to meet kids where they are.” Ponder added that “communities are always talking to us but are we listening? I believe that we should be putting play and rest in crisis response kits. It should be funded the same as traditional behavioral tool kits.”

Marte who started to get in shape during his time being incarcerated - he was put into the prison system starting from the age of 13 - and went on to form a fitness company that employs formerly incarcerated people, said:  "Perception is reality. If someone would've change that perception and given me hope, it would've been different for me. I hate bullies. The system is the bully." 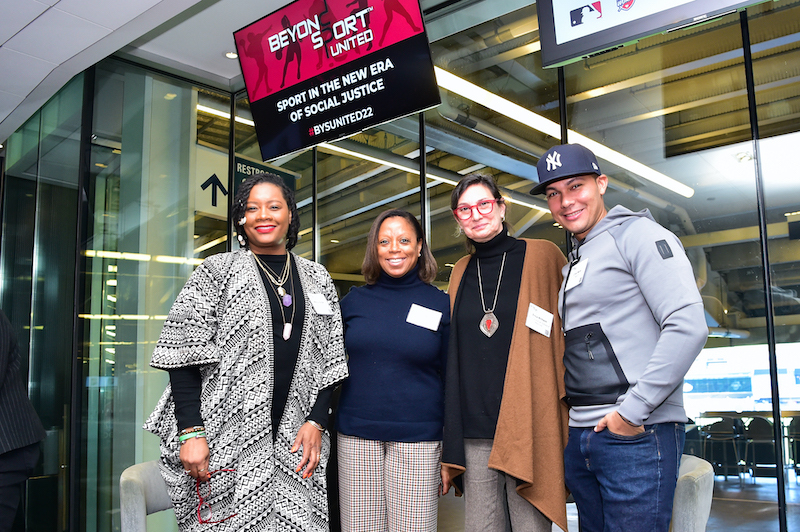 One Tree Planted believes that there is a massive opportunity for leagues, teams and athletes to leverage their influential positions to make a huge impact in the community through urban forestry. Haid noted that "You play so that your team wins. We have to push for the future we want." Similarly, Hagedorn spoke of SailGP's desire to work with other sport properties to share what they've learned in their first several years, as they believe that every sport has a podium.

Kwatra shared that marginalized communities are paying the biggest price for climate change that they are contributing the least to and touched on how the discussion is manifesting at COP27. She spoke on the need to include these populations in any and all policy negotiations otherwise we’ll see increasing social inequality and unrest. Vernon highlighted sport's role in the climate crisis and brought everyone’s attention on the need for the industry to address its textile waste.

“Sports and performance wear is nearly entirely plastic. Sport must push this systemic change in clothing, equipment and merchandising. If we don’t then there’ll be no field to play on,” he said. He also highlighted just how powerful sports figures can be in inspiring behavior change. 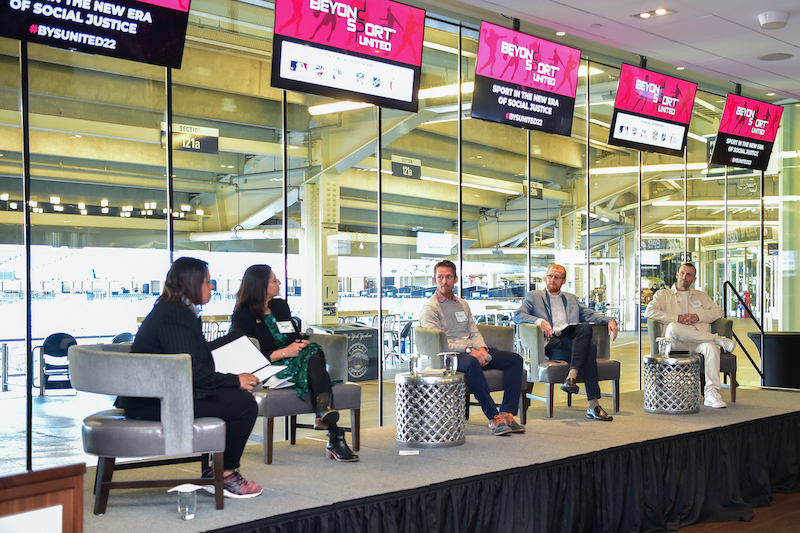 Each session was followed by table top discussions with the expert panelists on hand to contribute and listen to the conversations as participants explored what they learned and heard.

After lunch, attendees then went into case study workshops led by representatives from teams, leagues, event partners and community leaders. They had an opportunity to dig into best practice, ask questions and dissect real life examples across a broad range of social justice-related topics as approached by organizations, communities and fans.

These included roundtables led by: 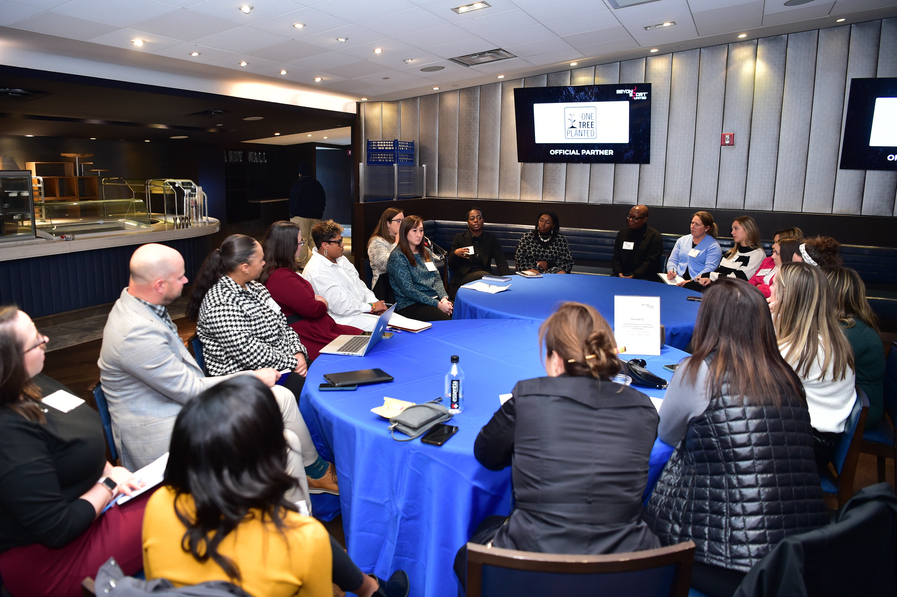 Next we focused on the individual activisim with Champions of Change: Athlete Activism in the New Era of Social Justice, featuring a conversation between Chris Dickerson (former Major League Outfielder and co-founder, Players for the Planet) and interviewer, Joanne Pasternack (Oliver+Rose).

Dickerson spoke on his upbringing in California and how that inspired his passion for environmental advocacym, continuing into his sporting career and beyond. "I was tired of looking at plastic and waste every night. Athletes seeing something and doing something is evolving. You'd be suprised about how many athletes want to get into climate activism." 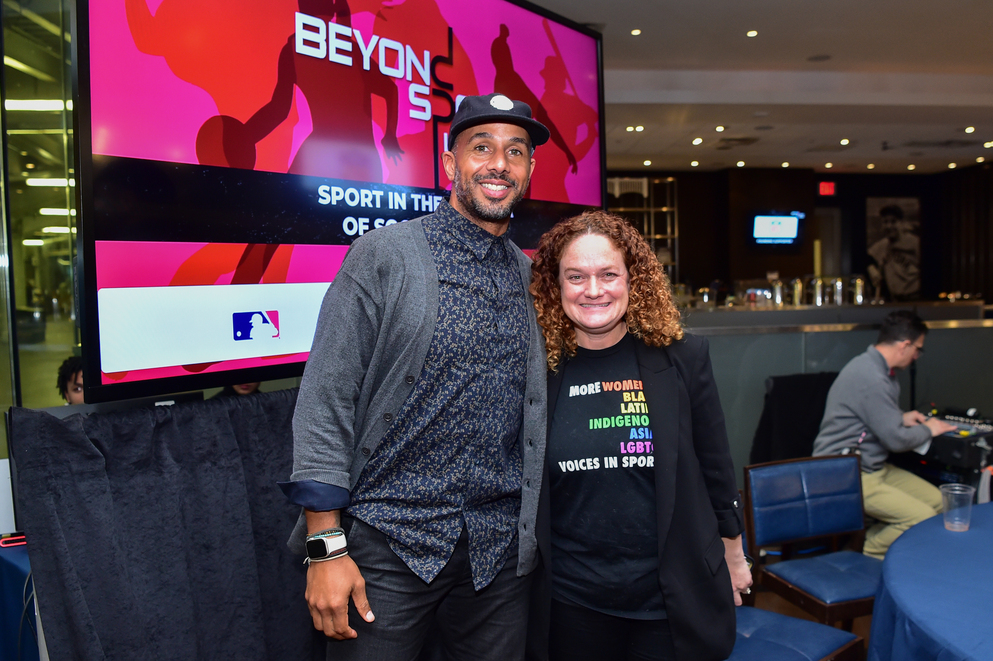 Closing out the day was Beyond Sport Founder, Nick Keller. “The transformation of Beyond Sport United over the last 10 years is unprecedented. Diversity and roles have changed but most importantly, the power of sport isn’t talked about loosely. Sports role in specific intentional change is here. Following today, the consensus was to listen, support and repair in communities... I’d like to see more partnerships and KPI’s focused on social obligations continue to grow.”

Beyond Sport is appreciative of all our attendees, speakers and partners for making the forum a success. 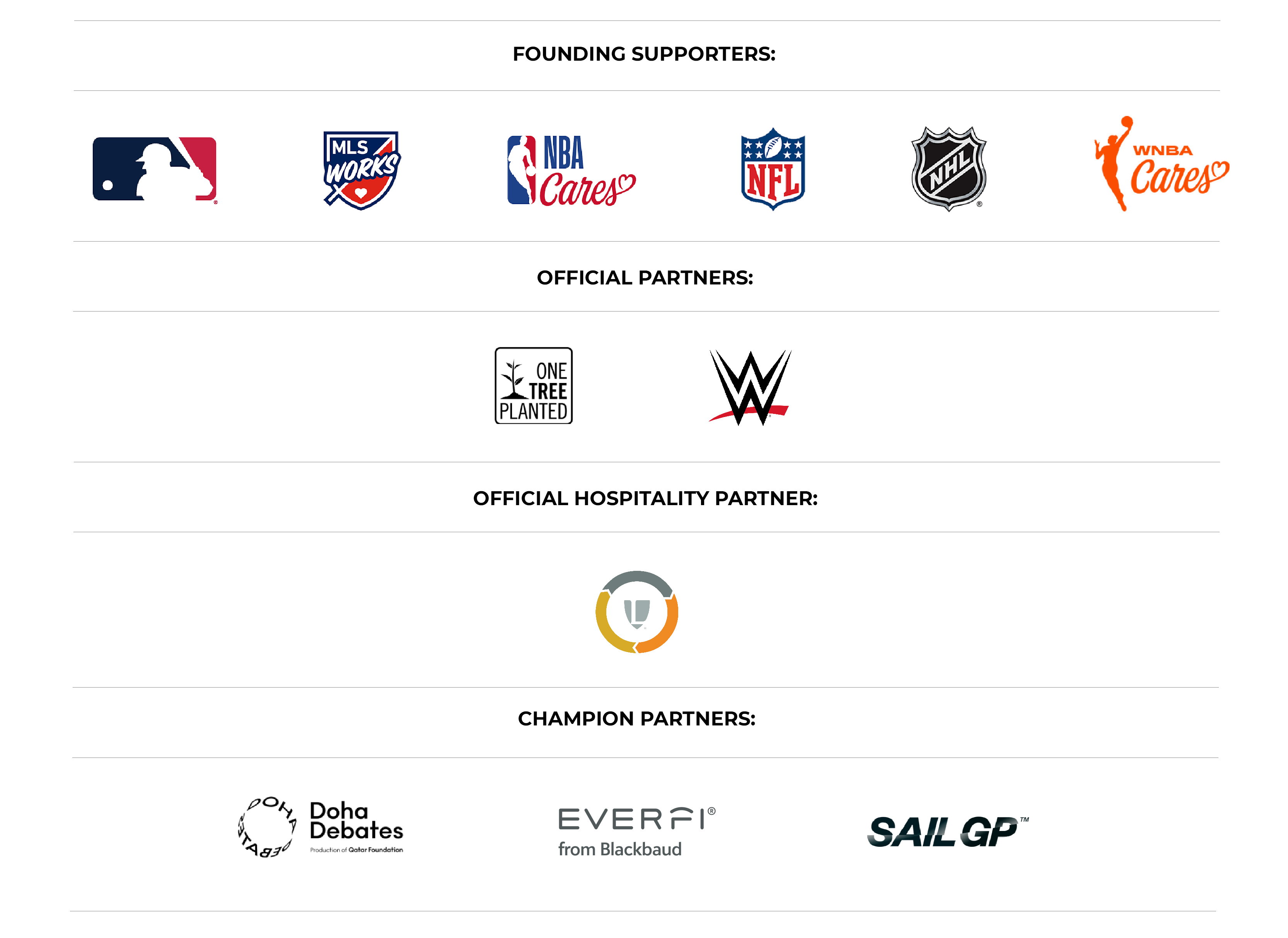 2022 COURAGEOUS USE OF SPORT AWARD