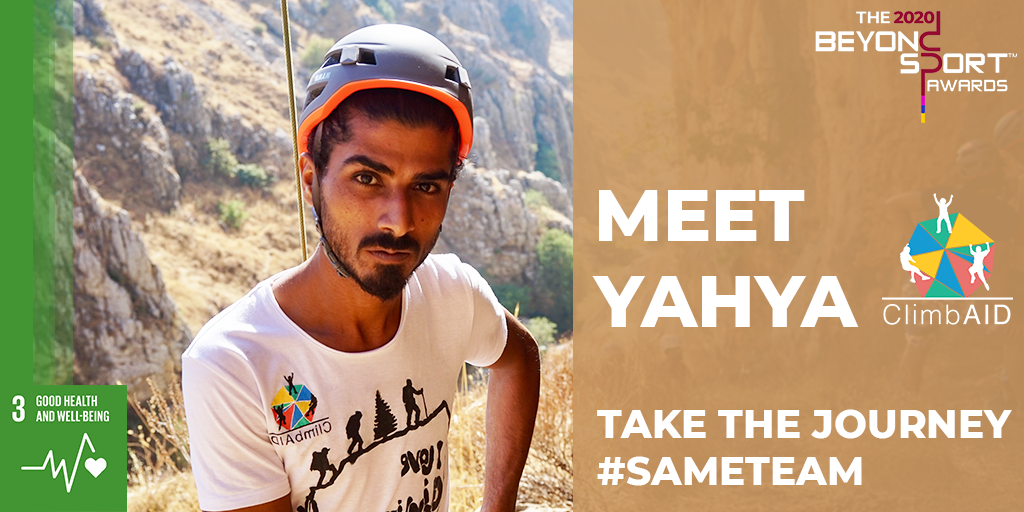 “Climbing is an interesting activity that calms the soul.”

Meet Yahya Al Zaid, forced from his home in Syria due to the war, he now lives in Lebanon. In 2019, he was introduced to 2020 Beyond Sport Global Awards Shortlister for Good Health & Well-Being, ClimbAid, which changed his life. Read about his experience below and then Take the Journey with our shortlisters at beyondsport.org/journey through December.

25-year-old Yahya comes from the Syrian countryside of Damascus, where he enjoyed ‘a beautiful life’ during his childhood. He lived with 10 sisters and 3 brothers, his father had a good job as a teacher and he was dedicated to his agricultural studies. That all changed when the war broke out.

Like 1.5 million of his fellow Syrians, he fled to neighboring Lebanon leaving his country and all that was dear to him behind. The last time he saw his home and most of his family was in 2013.

Lebanon has the world’s highest number of refugees per capita, a third of whom live in the Beqaa Valley – one of the poorer regions. Most have little or no access to basic services and approximately 75% live below the poverty line. Health repercussions can include: illness due to poor living conditions, inadequate food and water, increased stress from this plus legal status, language barriers, discrimination, isolation and poor socioeconomic conditions.

Since his displacement, Yahya says a lot of things have happened - most of them bad - but some very good. In the summer of 2019, his cousin told him about ClimbAid and with his brother, Ali, he decided to check it out. It ended up changing his life. He has since become a strong and dedicated climber and one of organization’s newest team members.

“I learned that all life’s problems are comparable to the principles of climbing. Nothing can be resolved without calmness and patience. I get so excited to climb when we all gather and when we all get pumped trying new routes repeatedly. Currently, climbing is the most important thing in my life, so whenever I have some free time, I climb, even if I am alone, I do so to relax.”

Some of his family has joined him in Lebanon and he now lives with his parents, sister and two of his brothers in Bar Elias. His ClimbAid family say he’s an excellent climber who absorbs the technicalities of the sport with skill and finesse. They believe he has bright future in rock climbing and is on track to take over leadership of the project in Lebanon. Yahya is pursuing his potential to its limit, eagerly learning everything about the sport, and hopes to one day bring it home to Syria.

“The best thing that cured me of psychological problems and illnesses that I could not work through or treat…is the introduction to climbing that ClimbAid gave me. I am now working with them to help children and young people who have suffered like me. I hope we can help them as ClimbAid has helped me.”

“Surf therapy is fun. A wave will teach me a lesson every time, whether I am open to it or not.”