From October 26 to November 6, we are highlighting the stories and work of our 2020 Beyond Sport Global Awards Shortlisters who are using sport to promote peaceful and inclusive societies. Shelter Ashraya Nepal is one of them. Learn more about their Empowerment through Sports program and the incredible impact they are having on street-connected children in Nepal.

Shelter Ashraya Nepal envisions a society where children and youth are safe, protected and have access to all basic rights like birth registration and citizenship. Using sports, they work with street-connected children, whom organisation President Khusbu Oli, defines as children who have ended up on the streets due to trafficking, drug abuse, child labour and much more.

“In rural Nepal there are hardly any sports. Our one major goal is making football possible for everybody. We want these children to have sports in their lives and we can give them an opportunity where they can play, where they can be mentally fit and where they can be healthy,” says Khusbu.

Shelter Ashraya Nepal run many campaigns that work to fix social prominent issues ingrained in Nepalese society, including child marriage and menstrual exile. Menstrual exile, also known as Chhaupadi, is a tradition in the Himalayan country of Nepal where 72% of young Nepalese women and girls are shunned during their menstrual cycle every month. 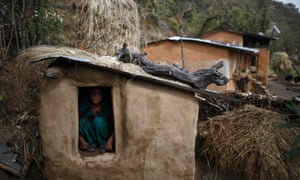 “In Nepal when girls menstruate, they have to be exiled in a den. They cannot live in their houses and they are considered untouchable for 7 to 10 days,” says Khusbu. In the isolated, unhygienic or insecure huts and sheds, women can face the bitter cold, illness, the possibility of sexual assaults and being attacked by wild animals. “We want to demolish all menstruation dens in Nepal,” says Khusbu.

Their ‘Driving Social Change – End Menstrual Taboo’ campaign advocates to end this harmful tradition. To raise awareness and aid in the change, the organisation is running women’s football tournaments and working with local bodies to abolish the huts. The football tournaments also raise funds to promote sanitation, hygiene, safety and overall women empowerment.

Shelter Ashraya Nepal’s shortlisted project, ‘Empowerment through sports’, is designed to promote physical education and practice of sport, as the means to prevent violence, homelessness and drug consumption. However, it wasn’t always easy to get the children into their rehabilitation homes, explains Khusbu.

“It was very difficult in the beginning because children living on the streets are accustomed to drugs, a lot of abuse and socially they are not comfortable. Building that trust was the most important thing for us and only one thing kept them in the house which was sports.”

Shelter Ashraya Nepal utilised the power of sport, opening a football ground that is used as a safe space for street-connected children, operating in a 24/7 support system to any child who feels threatened, scared or at risk. They also organize football tournaments where children come together and through football advocate for their rights and push against the negative perceptions of street children in society.

Since being established in 2014, Shelter Ashraya Nepal has helped many children and many successes have followed, including the story of two young brothers:

These brothers, like many Nepalese street children, were homeless and addicted to sniffing glue, since being separated from their mother during a post-conflict migration. Only a few weeks after being taken in by Shelter they were attending school and highly motivated. They now volunteer as counsellors for other street children, and one of the boys was selected to represent Nepal in Malaysia in a football friendly and training organized by the Asian Football Confederation and Football Association Malaysia.

“We are planning to organise campaigns, football tournaments and awareness programs because these issues should be heard, seen and cured,” says Khusbu. “A child everywhere is a child. We want them to understand that they are somebody and they can achieve.”

Shelter Ashraya Nepal is a 2020 Beyond Sport Global Awards Shortlister in the Sport for Peace and Social Justice category. Learn more about the rest of this year’s Shortlist and follow their journeys at beyondsport.org/journey.

How the HlawulaVutomi program is giving Southern African communities a voice, reducing conflict and encouraging people to protect wildlife and 'choose life'