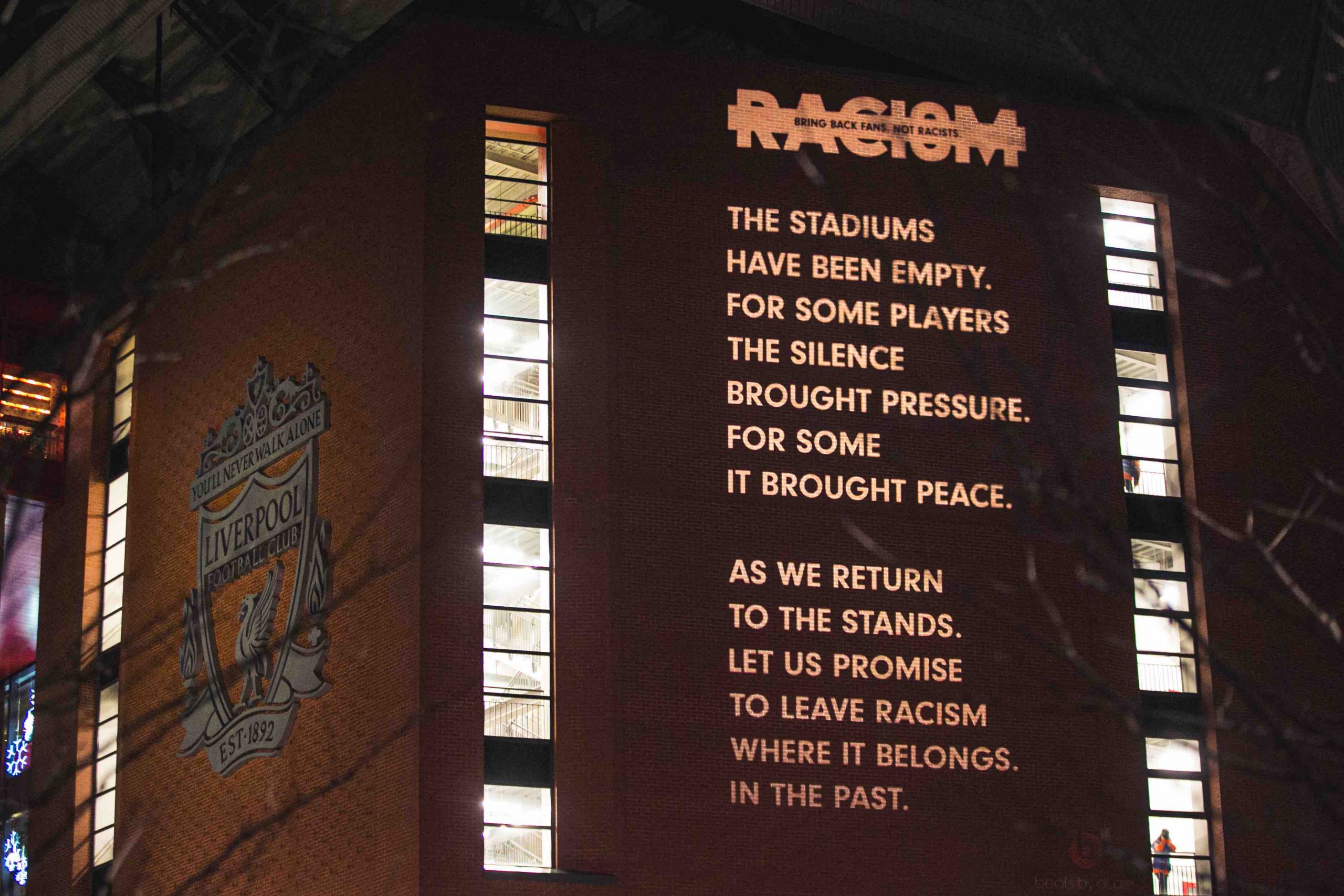 Beats by Dre lights up football stadiums with anti-racism messaging

Football stadiums across the UK were the target of a new activation by audio brand Beats by Dre, who lit up grounds with anti-racism messages upon the return of fans.

The move is part of the brand’s ‘You Love Me’ campaign, which celebrates Black culture and resilience, and saw a number of iconic stadiums including Anfield, Stamford Bridge, Emirates Arsenal and the Tottenham Hotspur Stadium adorned with anti-racism messages projected on its exterior.

To mark their position firmly on the matter, a number of face mask for players and fans featuring the words, “Bring back fans. Not racists” were handed out before each game.

Continuing the brand’s recent efforts to highlight changes that still need to happen, the projections follow on from the release of its recent one-to-one discussion between former Chelsea footballer and activist Paul Canoville and current star Callum Hudson-Odoi.

The pair acknowledged the necessary work that still needs to be done to eradicate racism from football and society, once and for all, and reflects on the differences in experiences both men had when playing for Chelsea in different eras.

The campaign kicked off in November with a short video that honors Black culture, celebrates Black joy, showcases Black stars and confronts racism. Tennis star Naomi Osaka, NASCAR driver Bubba Wallace, rapper Lil Baby, activist Janaya Future Khan and others can be seen in the two-minute clip that opens with the familiar refrain, “You love me; you love me not.”

But in this case, those lines don’t refer to the romantic petal-plucking game. Instead, as the video highlights, it’s all about mixed messages that are a common component of systemic racism — such as embracing Black culture without embracing Black individuals.

The short film — which is titled "You Love Me" — was directed by Queen & Slim's Melina Matsoukas, scored by Solange Knowles and narrated by indie artist Tobe Nwigwe.

"Many of the cast and creatives have had the disparate experience of the world actively loving their work, their music, their art or their athletic achievements, while also seeing their community oppressed and regularly under attack," Beats said in a press statement.

"The campaign highlights how the conversation around the Black experience should not solely be about injustice; however, in celebrating and showcasing Black joy, it delivers a statement in itself."

Portions of this story are courtesy of the Sport Industry Group.