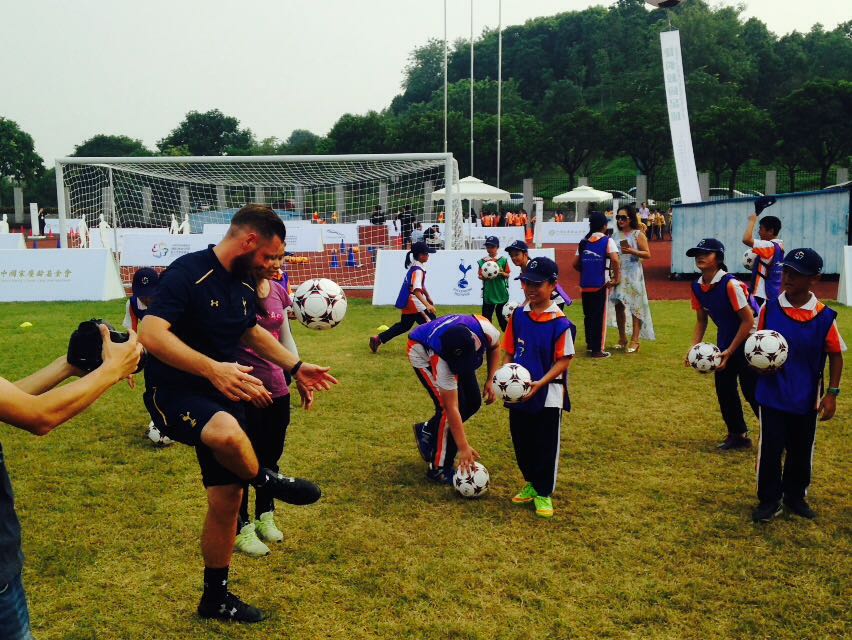 In response to the national call to develop youth football in China, Jaguar Land Rover China, the Guangzhou Education Bureau, the China Soong Ching Ling Foundation and Tottenham Hotspur Football Club are joining forces to kick-off the Jaguar Football Campus Guangzhou, delivered by Tottenham Hotspur in front of 300 guests, including 200 young football players who are set to partake in this year-long initiative.

Utilising their expertise in youth football development training, members of the Tottenham Hotspur Global Coaching Team will provide 42 PE teachers with the coaching skills, drills and techniques they need to deliver high-class football training to 8,000 primary and middle school students in Guangzhou.

The methods employed by the Tottenham Hotspur Global Coaching Team are the same as those used within the club’s football academy in London, which has seen the development of a number of first-team players such as Harry Kane and Danny Rose over the past few years.

The participating PE teachers will gain a unique insight into coaching at the highest level, which will help promote further development of grassroots football in China.

“Youth football development has been a cornerstone of the Dream Fund since its inception in May 2014. In partnership with the China Soong Ching Ling Foundation, our football programmes are benefitting 30,000 Chinese children over three years until 2017. This latest initiative underlines Jaguar Land Rover China’s commitment to cultivating grassroots football, creating opportunities for children throughout Chinese society and growing its business in a sustainable and responsible way.”

“Tottenham Hotspur is delighted to be teaming up with Jaguar Land Rover China, the China Soong Ching Ling Foundation and the Guangzhou Education Bureau to deliver this youth football development programme in Guangzhou. We understand the importance of football development in China and, given our track record, we are perfectly placed to harness the talent and passion for the game in China to help develop young players who could become future stars of the game.”

In addition to delivering intensive face-to-face training sessions for local PE teachers throughout the year, the Tottenham Hotspur Global Coaching Team will work hands-on with the young footballers and their teachers together to ensure the Jaguar Football Campus Guangzhou, Delivered by Tottenham Hotspur is progressing successfully.

Furthermore, 40 children – some from Guangzhou and some from underprivileged areas of China – will visit the UK for the Jaguar China-UK Football & Cultural Exchange in November. As well as an intensive week of training at Tottenham Hotspur’s world-class training centre in London, the participating children will visit UK cultural highlights, play football with their British peers and attend the England vs. Scotland international football fixture on November 11th. The chief aim of the Football & Cultural Exchange is to provide a platform for greater understanding and interaction between the young people of the UK and China.