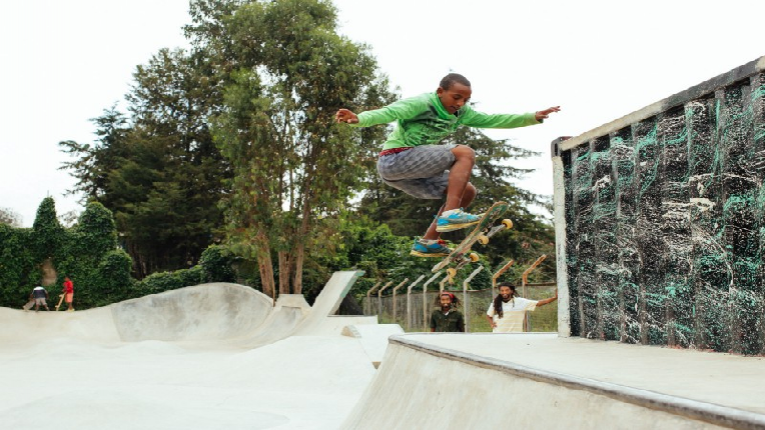 What started as a bunch of kids skating around a vacant parking lot grew to become a local community of hundreds of young skaters that come together through their passion of skateboarding. “Everyone comes together here,” says Sean Stromsoe, co-founder of Ethiopia Skate, the organization that oversees the park. “So a lot of friendships are created that otherwise wouldn’t have happened.” The kids at the park are not only discovering a new sense of community, but a passion, and talent, for skating.

The skatepark was born from the grassroots initiatives and collaboration of two groups passionate about community and skating: Ethiopia Skate and Make Life Skate Life.

Ethiopia Skate, under an enthusiastic group of volunteers, kicked off an ambitious Indiegogo crowdfunding campaign to get the money for the costly construction. With a goal of $60,000, they only raised $14,900. The team then decided to focus on building community momentum and awareness. They made ties with local community organisers and began to build their social following. Through these efforts, their project appeared on Anthony Bourdain’s show, CNN and Vice.

Then, an international non-profit organisation called Make Life Skate Life reached out to them. The organizations works with local skateboarding communities around the world to construct community-built concrete skateparks. Their projects have been successful through local community involvement from start to finish, providing local skateboarders with the tools, materials, knowledge, and inspiration to create their own projects.