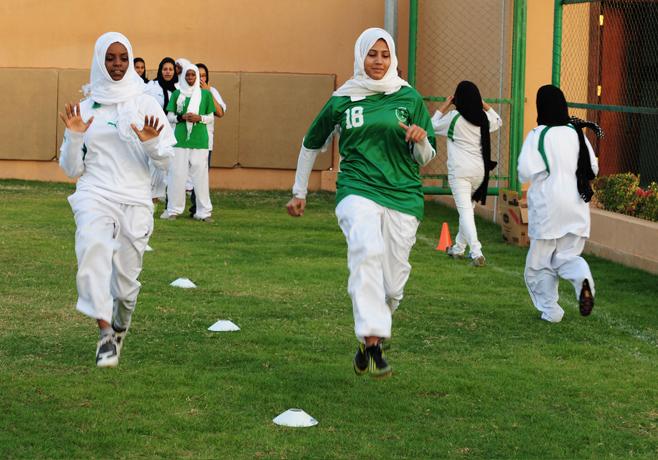 Coinciding with last weekend's International Day for the Elimination of Violence against Women, Saudi Arabia were pushing the boundaries of gender equality again through the medium of sport.

Six teams will play each other at a private school in Jeddah, in an effort to promote diversity, inclusion and female empowerment through the game.

By holding the tournament, the football teams are aspiring to boost the skills of their players and to gain the formal recognition of the General Sports Authority that oversees sporting events in the kingdom and be able to take part in competitions in the Gulf Cooperation Council (GCC), the Arab region and the world.

According to reports, women football players are facing formidable challenges that include finding expert women coaches.

“The comparison with other GCC countries is defavourable as Saudi female players do not even possess basic skills whereas expert and specialised women, including coaches, technicians and medics, oversee the women’s teams in other Gulf countries,” Reema Al Abdullah, player and coach with King’s United, said.

Founded in 2006, King’s United was the first women’s football team. It played friendly matches with Gulf teams, but it never participated in any formal tournament or championship.

Reema said she and the other players looked forward to support from the General Sports Authority to help them move forward, citing the high expenses needed for the team. The players currently pay for the team gear, the equipment and the rent of school fields that are not fit for football matches. They also pay for their travels to play friendly matches with other teams.

“We look forward to realising our dream to represent the kingdom in tournaments abroad. We feel that it is now nearer than before thanks to the support granted to sports in Saudi Arabia,” she said.

Last Saturday, a historic women's basketball tournament brought together teams from Jeddah United, Dar Al Hekma University, University of Business and Technology, DFAC, Braves, and Shoot for a Cause to raise awareness on breast cancer.

"I hope such tournaments will continue and I am confident that this one will be successful, as the strongest women's basketball clubs in Jeddah will be playing," Shura Council member and founder of Jeddah's first private female basketball club Leena Al Maeena said prior to the event.

Earlier this month, Iqbal Dandari, a member of the Committee for Human Rights at the Shoura Council requested the establishment of professional sports clubs for women.

She has been pushing for professional women's football teams, urging major Saudi football clubs such as Al-Hilal, Al-Nassr, Al-Ittihad, and Al-Ahli to set up teams for female players.

With sporting events for Saudi women moving forward, things are definitely looking up for female athletes.

Although many continue to criticize the country for being decades behind many other nations when it comes to women's rights, it's important to note that things have been changing rapidly.

When it comes to athletics, Saudi women stole headlines at the Rio 2016 Olympics. Four female Saudi athletes attended the international games, following in the footsteps of two bold Saudi women who participated in the London 2012 games.

If recent reforms and the new tournaments are any sign, perhaps a female Saudi football team will be heading to the next Olympics, or even competing in the Women's World Cup in the not-so-distant future.