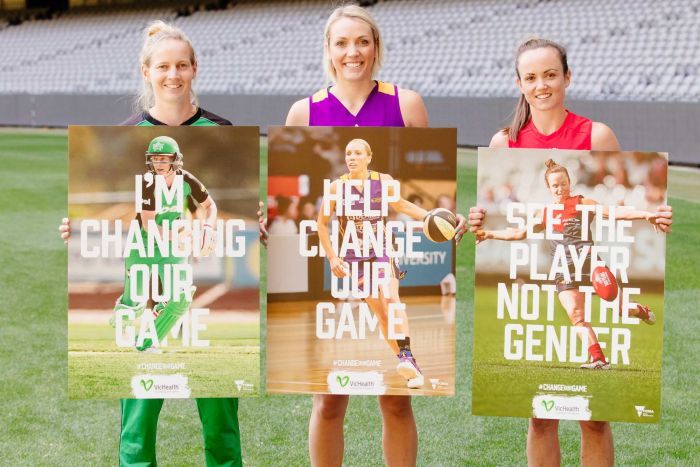 Women are being urged to "claim their place" in the sporting landscape in a push to drive up the profile of female sport, improve standards and help inspire the next generation.

Elite female athletes will feature on billboards across Victoria as part of the $7 million #ChangeOurGame campaign launched by the Victorian Government and VicHealth. The money will go towards building the profile of female athletes, increasing viewership, and boosting participation amongst females who do not play organised or competitive sports.

The AFLW, WBBL and WNBL will be involved in the campaign. Minister for Heath Jill Hennessy said women were underrepresented in almost all facets of sport participation and management.

"There is pay disparity, we've got women wanting to participate in sport where they don't have the facilities available to them, where the culture has not changed adequately," she said.

"It's about sending that message that sport isn't just for the elite women. Sport is for every woman and every girl.

"There is a place for you in sport and we are going to go out and claim it for you.

Girls no longer have to look up to male stars

Australian cricket captain Meg Lanning said she grew up playing with boys but now there were more opportunities for young girls to participate.

"It's about being inspired by athletes at the top level. My [hero] was Ricky Ponting because that's all I saw when I was growing up," she said.

The campaign comes on the eve of the first round of the inaugural AFLW season this weekend.

THE HOME OF CRICKET GOES INTO BAT AGAINST CLIMATE CHANGE