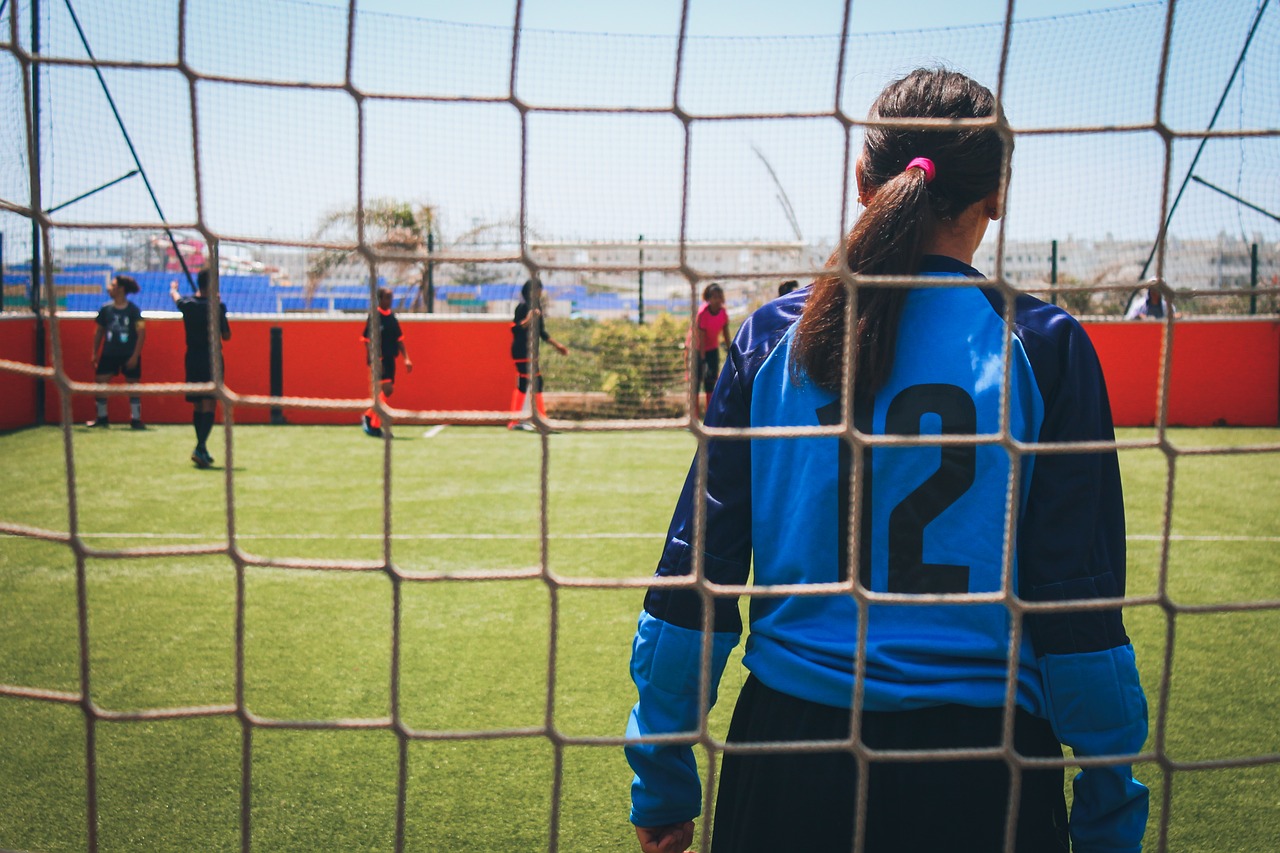 On July 13, we were excited to hold Beyond Soccer 2021, supported by MLS WORKS and official partner Women in Soccer (WIS). Hundreds joined virtually from around the world to engage with an impressive lineup of leaders from across the soccer industry, exploring diverse ways that the sport can promote diversity, equality and inclusion (DEI), gender equity and youth development - on and off the field of play.

The recent horrendous racial abuse faced by some of the Black England Football players following the EURO 2020 final; UEFA’s ban on the rainbow display that campaigns for LGBTQ+ inclusion during some of the matches; racist posts by Channel 7 News Australia in their match reporting; and the USWNT's ongoing fight for equal pay makes it clear that the issue is institutional and individual, local and global.  With racial and misogynistic attacks increasing, especially on social media, the event underscored the ever increasing importance of taking urgent action and having the necessary conversations to level the playing field and drive inclusion.

Our Director of Design and Facilitation, Radha Balani moderated the event which began with a discussion on accessibility and inclusivity in the game. 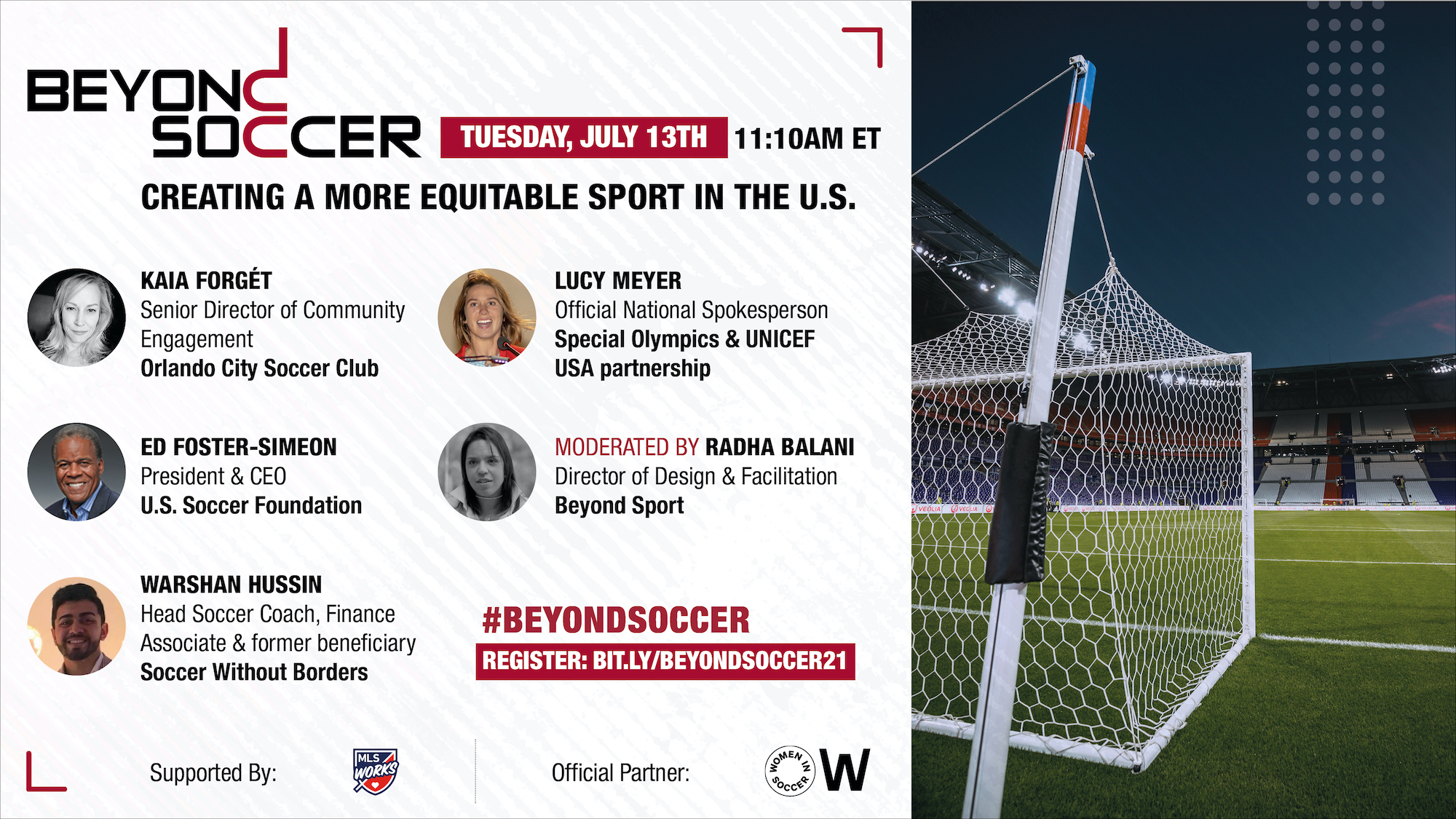 Ed-Foster Simeon explained that initiatives like MLS’s #SoccerForAll and expanding equal access to the game and its benefits is essential to soccer’s evolvement. “We [U.S. Soccer Foundation] shifted our mission to providing access to underserved youth in communities. You can’t just roll a soccer ball out on a pitch and expect children to play, they have needs and we need to provide something that benefited the kids. We not only want to teach the game of soccer but implement life-skill development, nutrition and more.”

Driving home the impact the game can have was Warshan Hussin who shared his very personal journey. Born in Iraq, the war changed his life forever, but soccer - and ultimately his work with Soccer Without Borders (SWB) - helped him build strong bonds and become the leader he is today. “SWB participants come from 60+ countries — our diversity is our strength. I wish that clubs would focus more on youth development and not just competition. If I can inspire just one person to do what I’m doing, I’ll be incredibly happy.”

Lucy Meyer echoed this sentiment as she spoke about her love for Special Olympics' Unified Sports and the impact it has had on her life. “One of the best ways to make children with disabilites be accepted and included is sport. It teaches us how to play on the same team and experience winning, competing, making new friends, having teammates and doing all the things we love to do.”

Women In Soccer then took to the stage for a lively and deep-diving discussion on club investment models and investing in women during a special edition of "Brandi’s Corner" featuring perspectives of players, owners and decision-makers - moderated by USA soccer legend, Brandi Chastain. 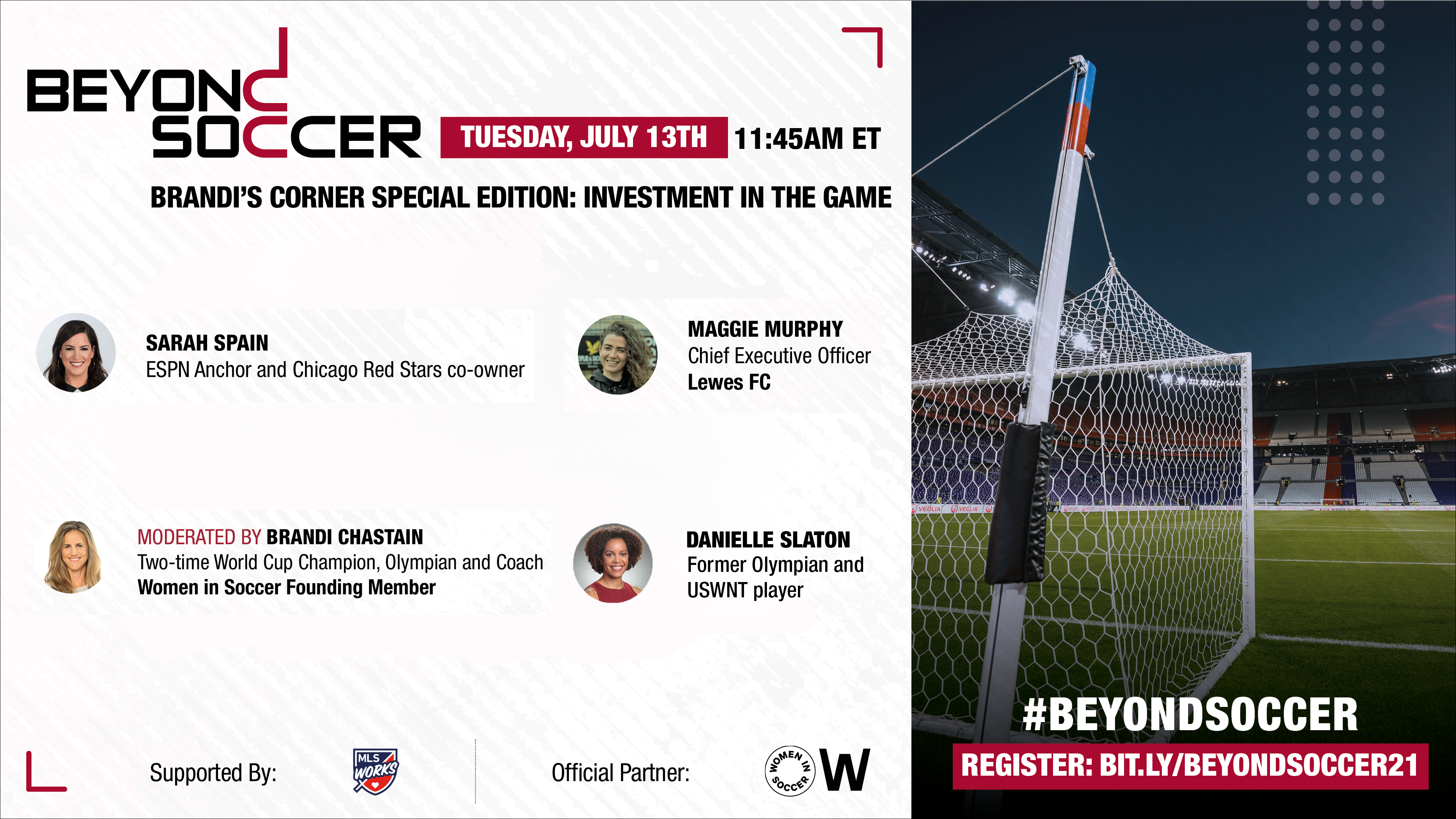 Sarah Spain provided a breath of fresh air and frank humor as she spoke on what inspired her to challenge her own mindset on who an owner could be on the path to her of co-ownership of a soccer club. After receiving advice from Abby Wambach who said, 'If there's not enough seats at table, don't just pull up new seat, build a new table,' she decided that "if we wanted to make change within the industry, we needed to change the model.”

The panel drove home that we must change who makes the decisions and not rely on old models as the only path to what is considered ‘success’. Maggie Murphy shared the many ways that Lewes FC is disrupting the norm and becoming changemakers. “In our marketing we target the ‘unwelcomed’, that’s whoever wants to be part of the game but never felt like they belonged or were welcome.” She shares that recently they had brought a group of elderly women to the football grounds to watch a match and it was "the most extraordinary thing to witness."

The next panel explored how the game is being increasingly leveraged in different ways to positively impact communities around the world. 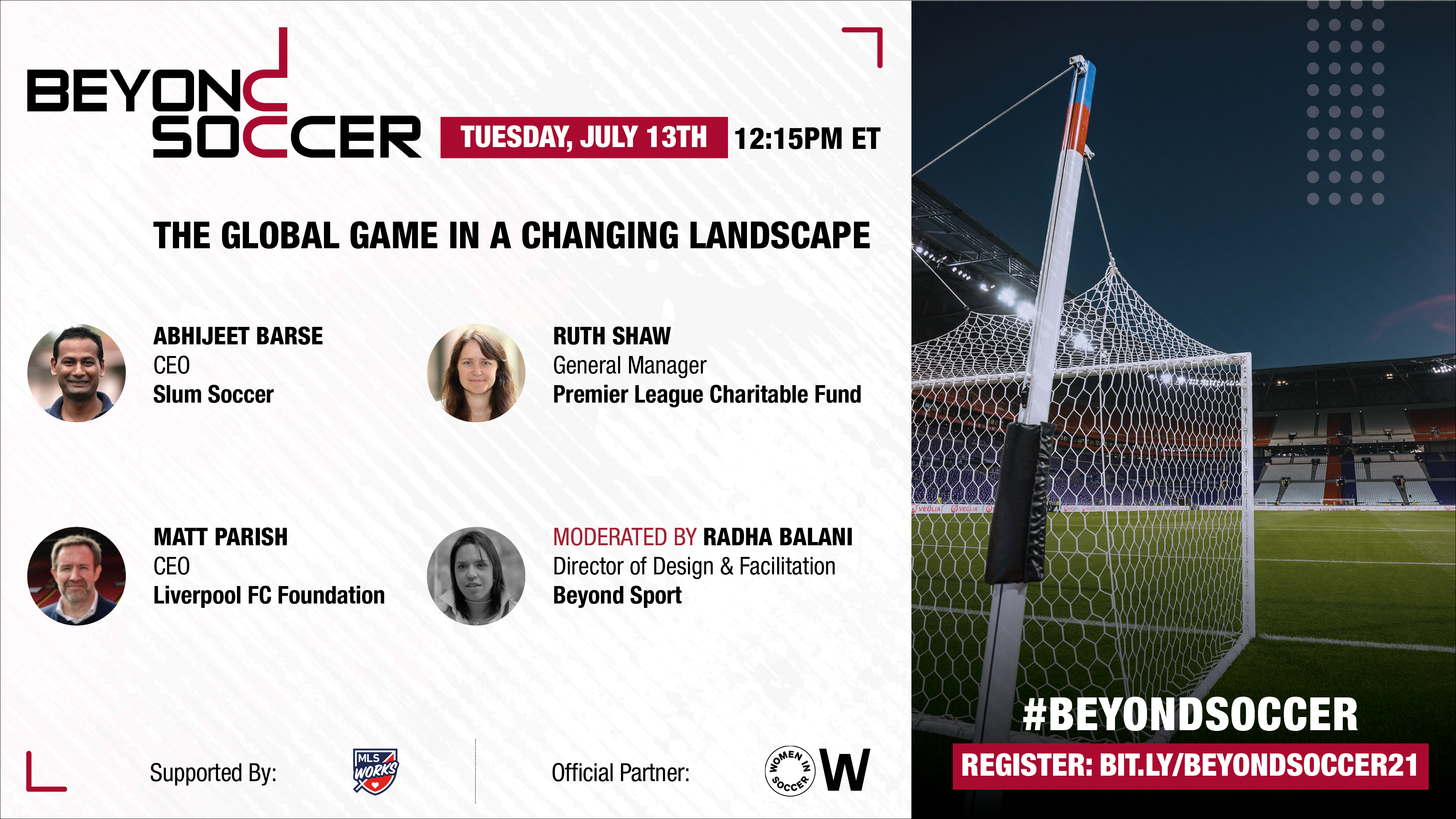 "Whether they take the knee to stand against racism, sport rainbow-colored bands or campaign for hungry children, what we’ve really seen this last year is that even when the football stops the community work continues,”  said Ruth Shaw. Emphasizing the power of collective efforts, she detailed football as a force for good and the brilliant work of clubs, foundations and organizations.

Abhjeet Barse eloquently shared his experiences with the power of soccer, saying that the first thing he noticed through his work with Slum Soccer was how eager the children in India were to be part of anything positive in their lives. "For most of our participants, nothing else is structured for them. Over years, I have seen so many of our young people become leaders."

Fittingly, Beyond Soccer closed with a focus on athlete activism. 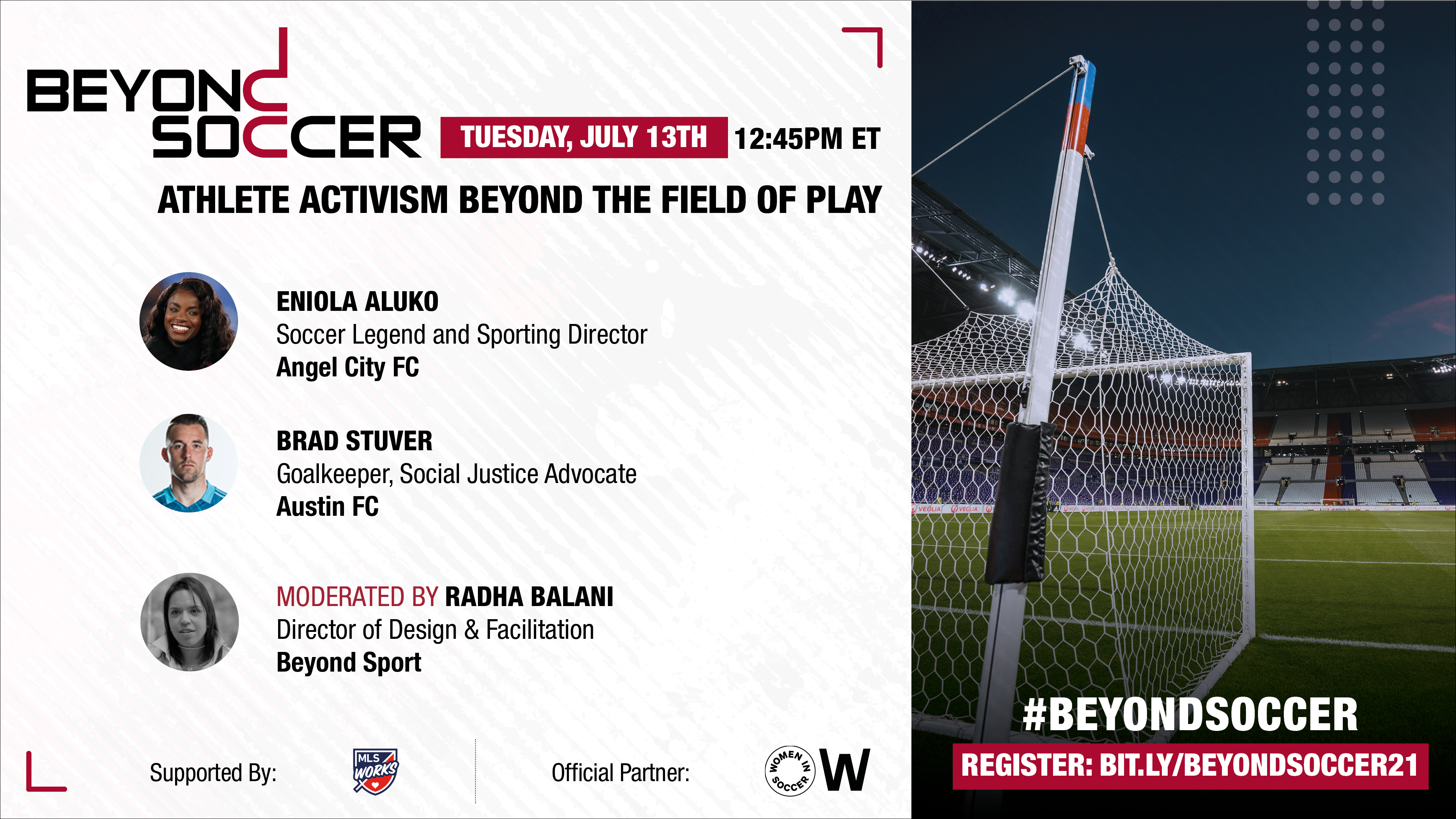 For Brad Stuver it is all about leaving a legacy, “As I've gotten older, I've seen with more clarity and perspective what truly matters. Athletes are people first and results will be forgotten, but at end of day, what I do off the field and striving to changing communities won’t.”

"Athlete activism is about the community, connecting and inspiring people and it is these realities that athletes should push through their platforms. However, people seem to forget that athletes are people too," Eni Aluko shared.

“Often athletes are seen as a liability or a depreciating asset. My job will be to support every athlete and be people-centered in this high performance environment. I want to build a diverse and inclusive team."

If you missed the event or want to catch it again, you can watch all the discussions below.

Soccer is continuously evolving, from its position as a tool to create positive impact in communities to the evolution of the professional game. Though only lasting two hours, Beyond Soccer packed in days and multiple countries worth of perspective and knowledge on the way forward for soccer/football as a powerful tool for change. To truly live up to its 'Beautiful Game' moniker, it’s important that we continue to these discussions and, as an industry, spur authentic action  to advance diversity, equity and inclusion within and around the game.

Beyond Sport is extremely thankful to our sponsors and all our fantastic speakers for expertly illustrating what it means to go Beyond Soccer.