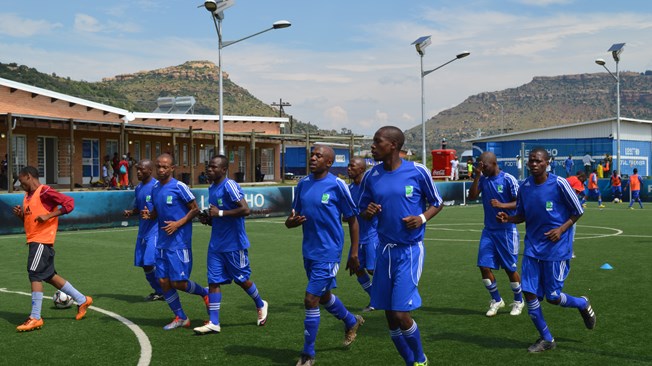 A club to support in Lesotho

In 2005, Steve and Pete Fleming dribbled a football for 250 miles across Africa to raise money for charity. “It was meant to be a one-off challenge but during the trip we saw the power of football to make a difference and decided it was just the start of a much longer adventure,” Steve recently told FIFA.com. That adventure has now become Lesotho's Kick4Life FC, the world's first football club dedicated at its heart to making a positive social impact.

The club began life as the Kick4Life charity focused by the two English brothers on using the love of football to drive health education and HIV testing. With support from the likes of Fabio Capello and England's Prince Harry, and help from FIFA's 2010 World Cup legacy initiative '20 Centres for 2010', Kick4Life has won many awards for helping children in the heart of the capital city of Maseru.

In order to give the more serious youngsters they worked with further opportunities to play football at a high level, they formed a team in 2009, which has progressed into Lesotho's Premier League and led to a refocusing of the organisation into Kick4Life FC – a combination charity and development enterprise wrapped up with top division men's and women's football teams.

“Initially we were very wary of introducing any element of elite football into our work, being worried that this would compromise our perception as an organisation dedicated to social change,” Steve Fleming, who serves as Co-Founder and Co-Chief Executive with his brother, explained. “It was a bold move, but we believed that as a football club dedicated to social change, we could achieve a level of social impact that was not possible in our existing structure as a traditional charity.”

That includes players on the Premier League team helping with the social work. “Many of our men’s and women’s players are involved in delivering health education & life-skills activities to vulnerable youth. Others are involved in helping to develop and train younger players in the Kick4Life Academy.

“Some of our players are themselves young people who have come through the organization, starting as participants and progressing through a range of social development activities.”

Despite their emphasis on off-the-pitch priorities, Kick4Life has nonetheless become a model club in Lesotho's top football league. In fact, it is in part their holistic approach to development and administration that has helped them improve their team, which finished a best-ever sixth last season. “The development of football in Lesotho over the last few decades has been inconsistent,” said Leslie Notsi, one of Lesotho's most respected coaches, who joined Kick4Life last season. “The standard of football in Lesotho is at an amateur level. The infrastructure and training equipment is a challenge. Administration of teams needs to improve, and medical institutions and personnel are not involved in a proper and well-managed setup. Kick4Life FC is leading the way in introducing these improvements, and it is exciting to be a part of.”

On a more macro level, Fleming is hoping that the club can help the country at large. “We see the development of a vibrant football industry in Lesotho as an important part of the country’s wider social and economic development. Over the coming years we hope to work with the Lesotho FA and the Premier League to play a part in professionalising the industry,” he said.

ENTRIES SET TO CLOSE FOR BEYOND SPORT AWARDS 2016